In Memory of Jan Ruff-O’Herne 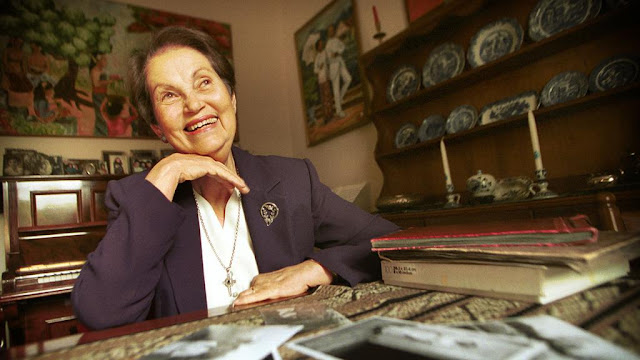 A shorter Japanese version of this article will appear in the September 13 Issue of the weekly journal, Shukan Kinyobi (Weekly Friday) in Japan.

On August 19, 2019, Jan Ruff-O’Herne, a Dutch “ianfu (Japanese military sex slave during the Asia-Pacific War), died in Adelaide, South Australia, aged 96. She was born in 1923 to a wealthy family who owned a sugar-cane plantation and sugar factory near Semarang in central Java in the Dutch East Indies (presently Indonesia). She had spent happy times there up until her late teens, raised by cultured parents and a grandfather who had a rich knowledge of art, music and literature. The sudden invasion of Japanese military forces in March 1942, however, changed everything. At the time, Jan was a student at a Teachers’ College in Semarang.
Her father was drafted into the Dutch military forces in the Dutch East Indies several months before Japan’s attack on Pearl Harbor in December 1941. On Java Island, however, the Dutch forces soon surrendered to the Japanese and on March 8 about 100,000 Dutch people were detained in either POW camps or civil internment camps. About 47,000 women and children were separated from the rest of the people and interned in several different camps set up outside Semarang. Jan was sent to one of these - Ambarawa No. 6 Camp - together with her mother and two younger sisters. From then on until the end of the war in August 1945, these internees were forced to live in difficult conditions, with insufficient food and medicine in an extremely unhygienic environment.
One morning in February 1944, when the internees were struggling to survive starvation and illness, a small group of Japanese military officers together with a few civilians suddenly arrived at Ambarawa No. 6 Camp. They selected 16 young women between the ages of 17 and 28 and took them away ignoring the fierce protests of their mothers and other internees. Twenty-year-old Jan was amongst them. They were put on a truck and taken to Semarang. Seven, including Jan, were sent to a “comfort station” called Nanakai-Tei (the House of Seven Seas) and detained. The following day, they were told to sign a contract, written in Japanese and Indonesian, which included the sentence “I volunteer to become a comfort woman.” Although all seven refused to sign, that evening they were all raped by Japanese officers.
Jan desperately tried to refuse the officer, who became angry and threatened her with his Japanese sword. Despite her continued resistance, he eventually pinned her down and raped her. From then on, every evening the girls were repeatedly the victims of horrific violent actions by Japanese men. One day when a Japanese medical doctor came to check if any of the girls had contracted VD, Jan told him that they had been taken from the camp by force, and that it was against the Geneva Convention. She asked him to report this criminal act to higher authorities, naively thinking that a medical doctor would have compassion for them. Instead, he raped her.
In fact, the victims were not only girls from Ambarawa No. 6 Camp. In October 1943, some teaching staff from the South Army Cadet School in Semarang contemplated setting up comfort stations in Semarang by procuring seemingly VD free young women from the internment camps in the area. The main reason for the establishment of comfort stations in the area was the high VD rates among the cadets at the school. They obtained permission from the 16th Army Headquarters on the condition that the Dutch women had to be “volunteers” in order to avoid any possible legal problems. Upon obtaining permission, in February 1944, many young women were selected and taken from a number of different camps near Semarang and sent to four newly established “comfort stations” for the exclusive use by officer class men. The girls were all required to sign a similar contract, claiming that they were “volunteers.” Like Jan, when they refused to do so, they were raped and detained as “comfort women.”
In April that year, Colonel Odajima Kaoru, a senior officer in the POW Management Bureau in the Ministry of Army in Tokyo visited Java to inspect the internment camps in the Dutch East Indies. During his inspection tour of Java, he was told of the fate of these Dutch girls by one of the camp leaders from the Ambarawa No. 9 Camp. Odajima immediately arranged for the girls’ release, believing that if the Allied nations were to learn that many Dutch girls, including minors, were used as “comfort women” against their will, it could cause a serious international problem. As a result, the Dutch girls were transferred to the Bogor Camp near Jakarta far away from Semarang and reunited with their families. However, they were ordered never to tell anyone of what had happened to them. They were threatened that if they did, they and their families would be killed. Throughout this time, many other comfort stations staffed by Indonesian “comfort women” continued to operate until the end of the war.
In 1948, the Dutch military forces prosecuted 12 Japanese men for this crime and tried them at the War Crimes Tribunal conducted by the Dutch Forces in Batavia. One officer committed suicide in 1947 before the court hearing actually started. Eventually Major Okada Keiji, who was most responsible for setting up the comfort stations, was sentenced to death, and 10 others were sentenced to between 5-20 years imprisonment. Japan’s current Prime Minister, Abe Shinzo, once claimed in Parliament that the Japanese military forces never forcibly took women into comfort stations using threats or direct violence. This Dutch War Crimes Tribunal report in Batavia, however, clearly contradicts this statement. It is not surprising that many nations including Korea do not trust the Japanese government headed by a Prime Minister, who boldly and unashamedly tells such lies in parliament.

Shortly after the war Jan met a British soldier, Tom Ruff, and fell in love with him. They married in England a year later in August 1946. Tom was gentle and patient, understanding Jan’s traumatic wartime experience well. Her body had suffered severe damage and was unable to sustain a pregnancy. Following three miscarriages, she had major surgery, which eventually enabled her to have two daughters. In 1960 the family migrated to Adelaide in Australia. There, her neighbours and friends regarded her as a happy housewife. She had decided never to speak of her three-month wartime experiences, although in fact she often had flashbacks, nightmares and other symptoms of PTSD. What she really needed was people with whom she could share her story.

In August 1991, after almost 50 years of silence, Jan was most surprised to hear of a Korean woman by the name of Kim Hak-Sun, who came forward as one of Japan’s military sex slaves. Kim’s brave action encouraged many other women not only from Korea but also from China and the Philippines to speak of their wartime ordeals for the first time. This sudden development led Jan to reveal her own past as a victim of sexual violence committed by Japanese soldiers. Unable to speak directly of her past trauma, Jan initially, wrote a long letter to her daughters, describing her suffering at the hands of the Japanese military and her 50 year-long post-war tribulation. She also told them of her decision to testify at the coming International Hearing Concerning Japan’s Post-War Reparation in Tokyo scheduled for December 9 and 10, 1992. It is impossible to imagine how shocking and heartbreaking it was for Jan’s daughters to learn that their mother was a victim of brutal Japanese sexual violence and that she had kept silent about it for almost half a century. Yet, both daughters expressed their strong moral support for their mother’s decision. In particular, Jan’s younger daughter, Carol, an artist, and her husband, Ned, a film-producer, showed their firm determination to assist Jan, saying they would accompany her on the trip to Tokyo in December.
Unquestionably, the testimonies given by the victims of Japan’s military sex slavery from Korea, North Korea, China, the Philippines and Holland at the International Hearing played an important role in forcing the Japanese government of the Miyazawa administration to acknowledge Japan’s responsibility for enforced military sex slavery and to express apologies and remorse to the victims in the form of an official statement issued by the Cabinet Secretary in August 1993. Jan’s courageous act inspired other Dutch victims to come forward as well.
From early 1993, both in Australia and elsewhere, Jan became active in testifying about her horrific wartime experience as a sex slave for the Japanese forces. Around the same time, I, as a lecturer in Japanese Studies at Melbourne University, also started conducting research on this topic. I became acquainted with Jan through correspondence and occasional telephone conversations.

In March 1997, the United Nations University organized an international conference “Men, Women and War” at Ulster University in Londonderry, Northern Ireland. Together with Jan, I was invited to this conference as a researcher on the topic of Japan’s military sex slaves. At the conference, following Jan’s testimony, I presented a paper on the history of sexual violence committed by Japanese forces during the Asia-Pacific War including the military sex slave system. Many female lawyers and medical specialists from the U.S., U.K., and other Western nations, who were then conducting surveys on the victims of mass-rape in Bosnia-Herzegovina during the Bosnian War, also participated at this conference.
During the three-day conference, I became aware that Jan’s testimony – i.e., that of a white woman among predominantly Asian victims – on Japan’s military sex slavery in the Asia-Pacific, far from Europe and more than 50 years ago, had a stronger message than expected. It was clear to many conference participants that military violence against women is a universal problem that continues to this day. At the same time, Jan herself clearly realized that the military violence against women that she had experienced has been repeated and is still recurring in many places of armed conflict. This realization made her even more determined to speak out against any form of violence against women. Her resolve is clear from the many subsequent testimonies she gave, such as at the Women’s International War Crimes Tribunal on Japan’s Military Sexual Slavery in Tokyo in 2000, and that at the congressional hearing on “Protecting the Human Rights of Comfort Women” in the U.S. House of Representatives in February 2007.
We Japanese, in particular Japanese politicians, should consider the issue of Japan’s military sex slavery, which victimized a large number of women from various ethnic backgrounds, as “a crime against humanity,” and not as a bilateral political issue between Japan and Korea. Regrettably, the Japanese government under the Abe administration now gravely distorts this human rights issue and treats it simply as a matter for political negotiation with the Korean government, completely ignoring Japan’s responsibility for this war crime committed by the Japanese Imperial Forces.
Despite her horrific encounter with the Japanese in the past, Jan was always cheerful and had a good sense of humour. Perhaps her jovial and positive attitude came from her strong confidence that many people were wholeheartedly supporting her activities to protect the human rights of women victims of war. Members of her family have been stalwart supports. In 1994 Carol and Ned produced a documentary film based on Jan’s autobiography, 50 Years of Silence and in 2018 granddaughter, Ruby, made a short feature film based on her grandmother’s war-time experience, titled Daily Bread. That her dark experiences had metamorphosed into an art form that would continue to impact audiences for years to come undoubtedly brought tremendous joy and relief.

I sincerely hope that Japanese people will be inspired to invite Carol and Ruby to Japan to screen these films there in many places in the near future.